Here are the stories I’ve published.  click on the pictures to be transported to their respective Amazon pages.

Almost a decade after the publication of FLUX, I finally have a new novel.

I’m excited and nervous about this one, which I suppose is normal for any release. If any bloggers / reviewers want a copy then please get in touch, I’d love to hear from you.

Deep in the woods at Picker’s Bleed there’s a fairy-tale cottage, where witches lived and demons lurk.

When Hannah and Jake manage to buy the dilapidated house deep in the English countryside, they think they’ve found their dream home, but their dream becomes a nightmare when Hannah discovers the house’s dark past won’t stay dead.

Ensnared by witchcraft and betrayed by those she turns to for help, Hannah finds herself dragged into the realm of the dead, caught in a battle to break an ancient curse and save her soul from eternal damnation.

British horror from the author of FLUX 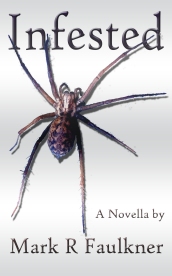 A novella, with spiders.

Knowing it would be his final trip down the river, he wished upon a star to be left alone.
He didn’t realise the stars would answer.

This is my latest long story, published early in 2014.  I think it’s the best thing I’ve written.

He thought it was all God’s plan… He was wrong.

In a city decimated by plague, a young boy is forced to fend for himself. After a long, hard winter he’s rescued by a band of monks, leaving his only friend alone in the ruins.

For a while life is good and his hardships a fading memory until, some two years later his new home is raided and the inhabitants slaughtered. During the attack he takes refuge in the catacombs which run deep beneath the monastery, where he discovers a mysterious black stone.

The stone bestows him with powers beyond his wildest dreams, but there’s a high price to pay for power and his discovery harbours a dark side… A very dark side.

A difficult to write second novel.  If you’re looking for laughs, it’s not for you.  grim and dark just about sum this one up. 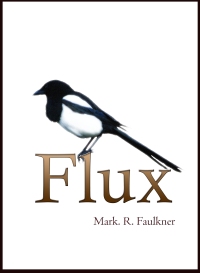 Iain is looking forward to the weekend when a number nineteen bus shatters his body, but broken bones are the least of his worries.

His near death experience is not a vision of exquisite godliness with light at the end of a tunnel. Instead he experiences a place of darkness and heat, inhabited by foul creatures, the sounds of suffering and a beast.

During a long recovery Iain becomes plagued by nightmares and premonitions, shadowy apparitions, a magpie, and a vile old man. They all have a message, that something wants Iain and it won’t give up easily.

Iain’s friends do their best to cheer him up in the best ways they know how, until the unexpected events of one sunny afternoon mean that he is on his own, caught up in the age old battle of good versus evil.

Published in January 2012, Flux is my debut novel.